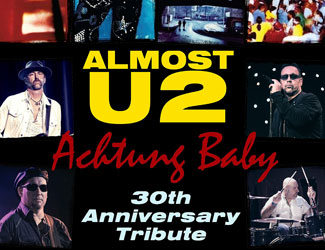 For 2021, ALMOST U2 will commemorate the 30th anniversary of U2’s 1991 artistic masterpiece, “Achtung Baby”.  This multi-media show will include a performance of the entire album, with homage to U2's infamous ZooTV tour...as well as many other U2 hits from the rest of their catalogue. ALMOST U2 performs their tribute with spot-on accuracy and attention to detail, paying homage to some of the greatest moments in concert history from the past 4 decades: Red Rocks, LiveAid, Slane Castle, and more.  With music spanning U2's entire catalog, their renditions of legendary U2 live performances honor the band and equally the experience of a real U2 concert.  These extraordinary and long-time NJ musicians will not settle for anything less than complete authenticity and will deliver the unmistakable live sounds of the original band.  U2 fans…this will be a show you will never forget!